Since 1995, Touching Miami with Love 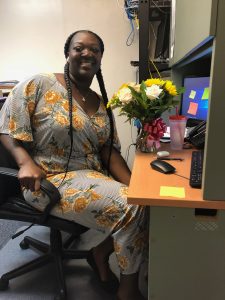 At TML, we believe in sowing into our youth so that they bear the fruit of long-term impact. While it is no surprise to have students visit us after they’ve graduated from our program, it is always rewarding to see them return for a simple “hello,” others invest and become part of our staff team. If you’ve ever called our offices, then you’ve likely talked to Brittney. She gave us permission to share her story.

Brittney was in grade school when she moved to Overtown with her grandmother when she and her two sisters began attending our children’s programming. By the age of fourteen, Brittney was already showcasing her leadership skills and became one of our summer Jr. Interns are working alongside our children’s program. During the summer, our Vice President, Angel Pittman gave Brittney one of the most precious yet valuable opportunities to babysit her own children while she would debrief with summer teams. Not only had Brittney become a leader, but she earned trust as she always showed signs of love, loyalty, and commitment through her actions.

As Brittney matured into a young woman, she consistently proved herself as a calm and caring individual. After graduating from high school, Brittney began volunteering at TML, which eventually led to a regular position as a receptionist. Our programs grew and we discovered the need for a Program Assistant. Brittney was the obvious choice as not only had she first hand experienced our programs as a student but now her son would be joining as well. While serving as Program Assistant, Brittney discovered many things, from having more confidence in herself and how to communicate professionally and effectively with her colleagues.  Five years later, we are excited to announce that Brittney has become our new Office Manager.  While this role has more responsibilities, we firmly believe in her ability to continue to learn and grow alongside the rest of our staff.

Having Brittney transition from a child in our program to a staff member years later is another example of the tremendous work our teams dedicate themselves to. We believe in our students, even on the days, they don’t believe in themselves. We are confident in the leader Brittney has become and are excited for her as she takes on her new role.